Some Photographs from the 50th Anniversary Service Now Online 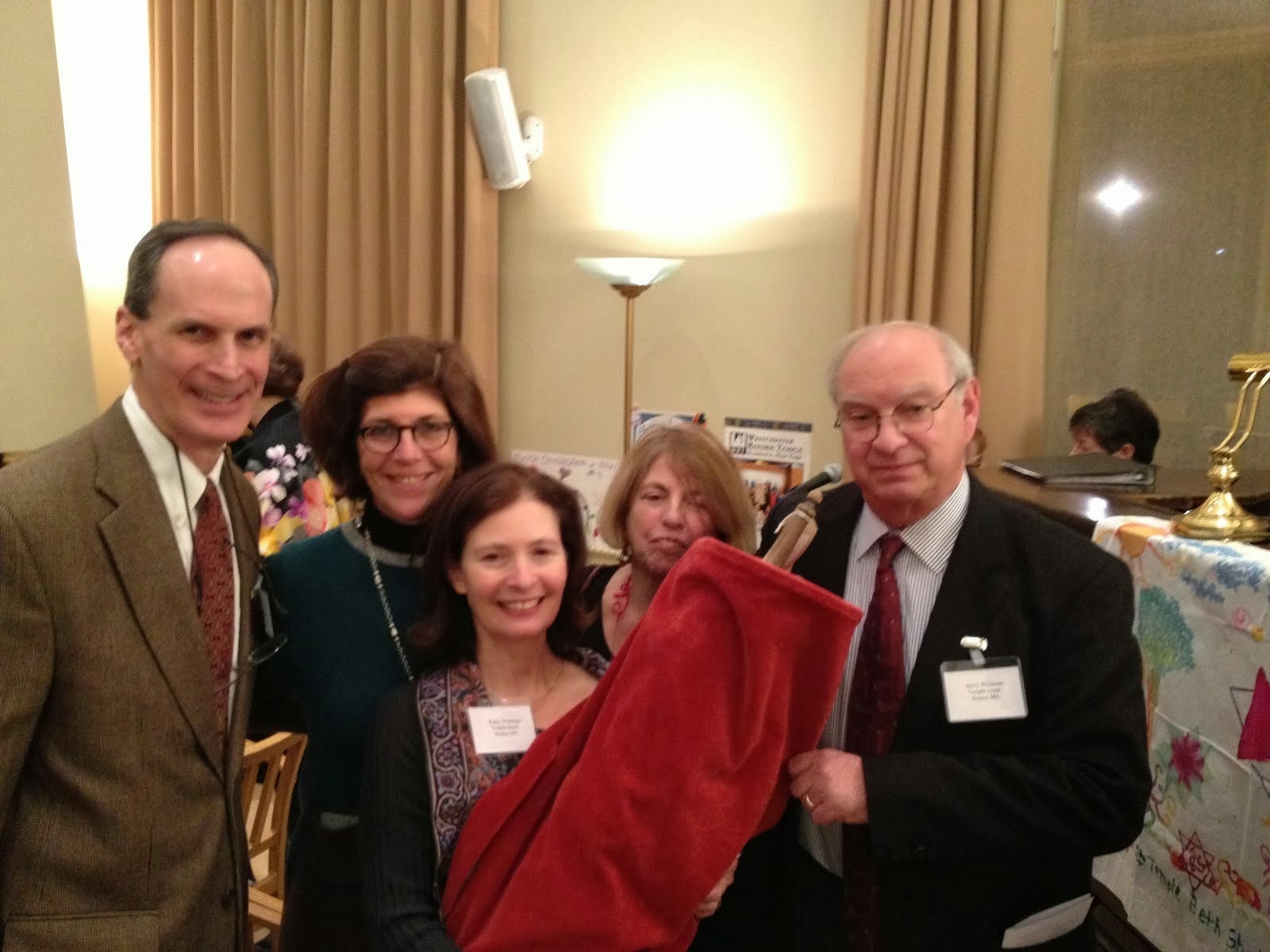 Here we see five past and present Temple Presidents from Temple Israel of Boston with their scroll, MST #877 from Blatna. This was taken on 9th February 2014, when the Memorial Scrolls Trust celebrated the 50th anniversary of the arrival of the Czech Scrolls by inviting all scroll-holders to bring their torahs to a reunion service at Kent House.

More photographs are available for your viewing pleasure on the MST website, and if you'd like to see them right now, the link is here.

MST in the Media This Week

We have once again gathered together recent links to stories and reports about Czech Scrolls lent by the Memorial Scrolls Trust, and the communities that care for them:

NorthJersey.com reported on the actions of Temple Emanuel of the Pascack Valley as they celebrated with MST #974 from Pribram. LINK

The Jewish Chronicle continued to be fascinated with the link to Senator Kerry, as noted on its Diary page. LINK

MST #398, on loan to the Hebrew Union College-Jewish Institute of Religion at its Cincinnati campus, was featured in the weekly Chapel service. LINK

South London Liberal Synagogue reported in its monthly newsletter that MST #217 had taken part in the 50th Anniversary Service. LINK

The text of the sermon preached by Rabbi Andrew Goldstein at Northwood & Pinner Liberal Synagogue at the Erev Shabbat service before our Commemoration Service may be found here:  LINK

Finally, the short film about 9th February 2014 that was made by Dale Bluestein may now be found on the MST YouTube page. LINK

Do let us know if you have any links that we could share with our blogging, tweeting, Facebooking and website friends. Thank you!
Posted by MST at 2:34:00 pm No comments: 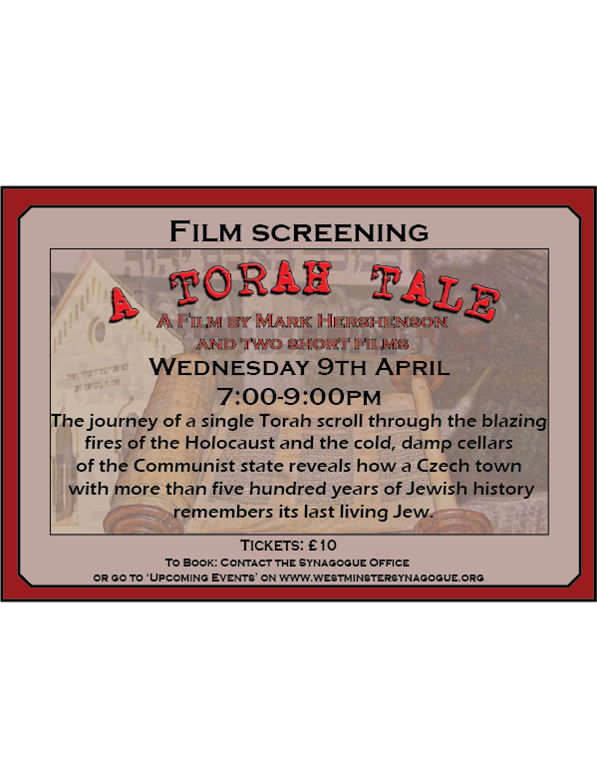 Mark your calendars in April for the 50th Anniversary Film evening. We'll be premiering Mark Hershenson's film in the UK, and showing a couple of shorts as well!
Posted by MST at 10:49:00 am No comments:

Email ThisBlogThis!Share to TwitterShare to FacebookShare to Pinterest
Labels: 50th Anniversary of the Scrolls, A Torah Tale, Czech Scrolls, MST 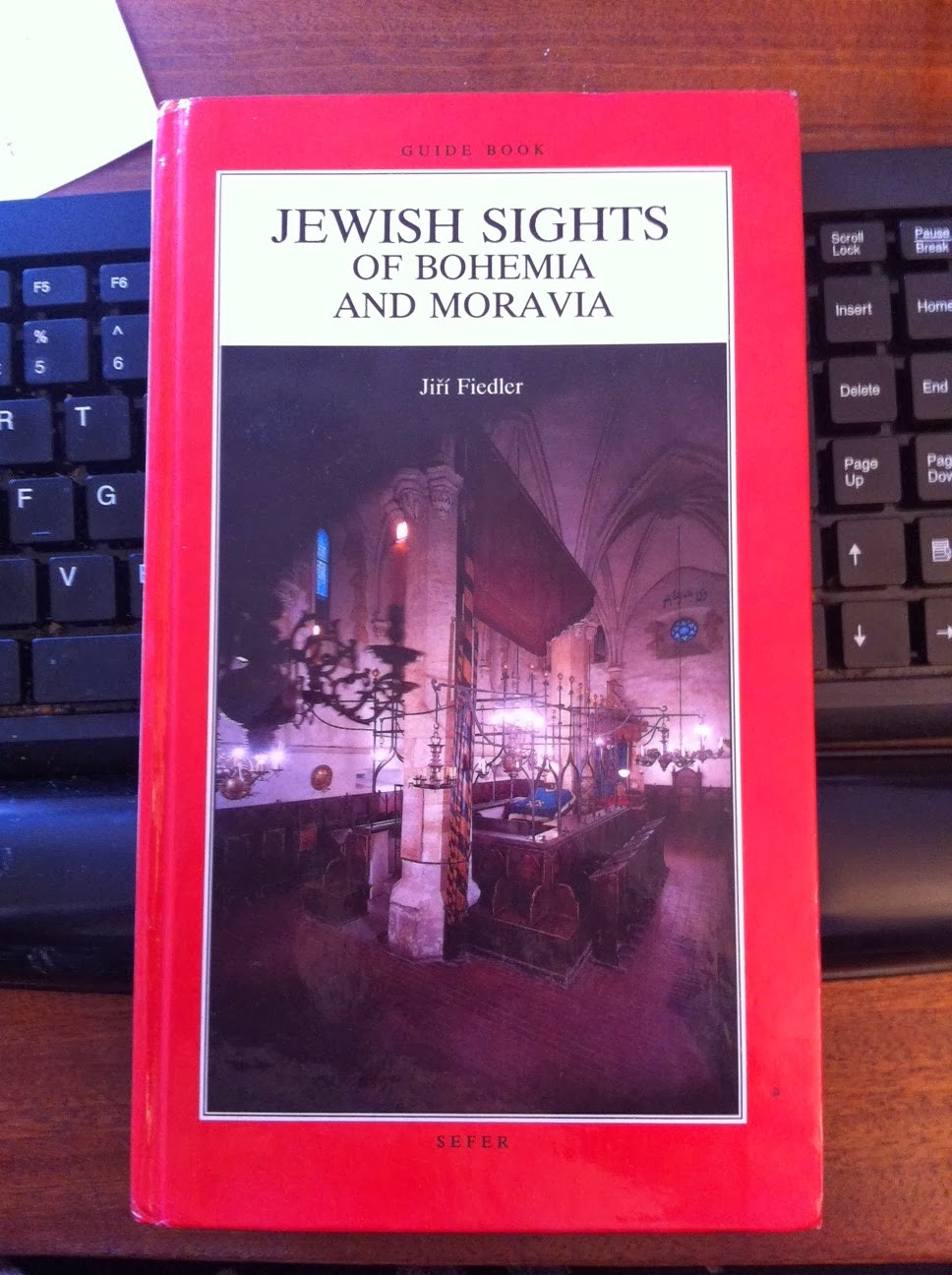 the MST is devastated to have received the following news via Helen Epstein:

"I have just learned that Jiri Fiedler, former Director of Research at the Prague Jewish Museum and a great friend to many of us (he was instrumental in helping me research Where She Came From: A Daughter's Search for her Mother's History) was killed at his home this past month. The funeral is next week in Prague. I will forward more information if I receive it and would ask you on the list to do the same. He was a wonderful man. May his memory and that of his wife who died with him, be a blessing."
The book in this photograph is the only one in the MST office that remains always on the desk, ready to help us answer myriad queries about Jewish life in the Czech Republic.

Links to Recent Reports About the Czech Scrolls 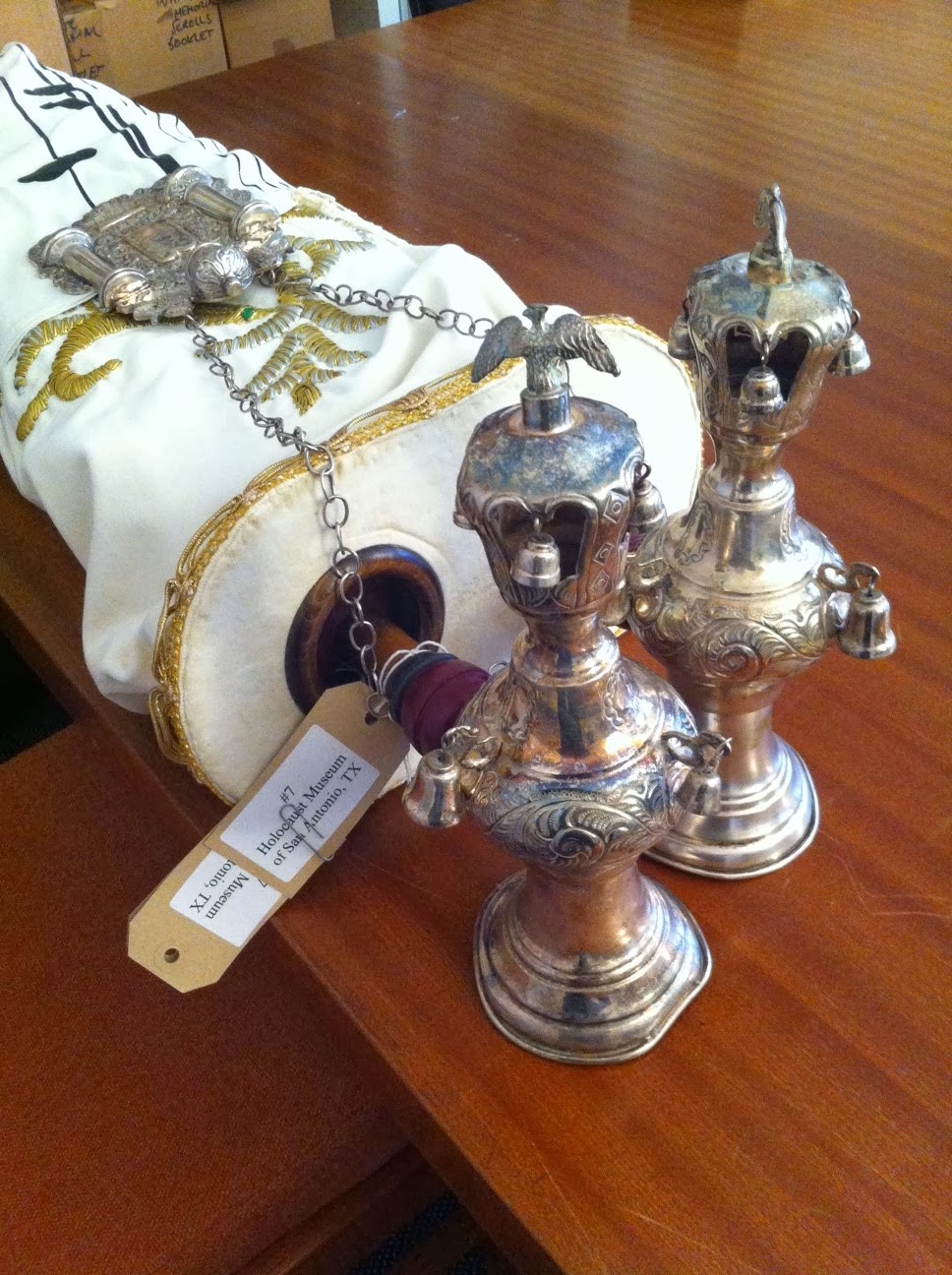 Here are a selection of links to recent articles and blogposts responding to the MST 50th Anniversary Service a couple of weeks ago. We hope you enjoy them!

At a sister service that same weekend, Temple Beit Ha-Yam rededicated MST #1254 from Prestice. Read about it here.

Temple Emanu-El of Dallas also planned a rededication service for MST #726 from Klatovy.

Rabbi Neal Gold of Temple Shir Tikva in Wayland MA blogged about his experience at Kent House with MST #779 from Jicin here.

Temple Beth Shalom in New Albany OH posted a set of photographs on Flickr documenting the rededication service they held for MST #131 from the Pinkas Synagogue in Prague. There was also an article about it in the Columbus Dispatch.

The Gloucestershire Liberal Jewish Community brought MST #944 to the service. Read about it here.

Paula Farbman, who with her late husband Leonard arranged the loan of MST #1187 to Temple Oheb Shalom in Baltimore, brought 9 members of her family to our 50th Anniversary Service as a special birthday present to herself. The Baltimore Jewish Times covered the story.

In case you missed it, the UK Jewish News shared some words and a picture here, and the Jewish Chronicle reported on the service here.

Finally, a totally unexpected source of pride was a reference to our celebration by Cameron Kerry, the brother of US Secretary of State John Kerry. Mr Kerry was part of the large group that visited from Temple Israel of Boston, and noted that his daughters read their batmitzvah portions from one of our scrolls. You may find the Huffington Post version of the article here.

Do let us know if your synagogue has featured our scrolls in some way, especially during this anniversary year!

We were delighted to see that the two major weekly Jewish newspapers in the United Kingdom ran articles last week on the 50th Anniversary Commemorative Service. Here they are for your reading pleasure: 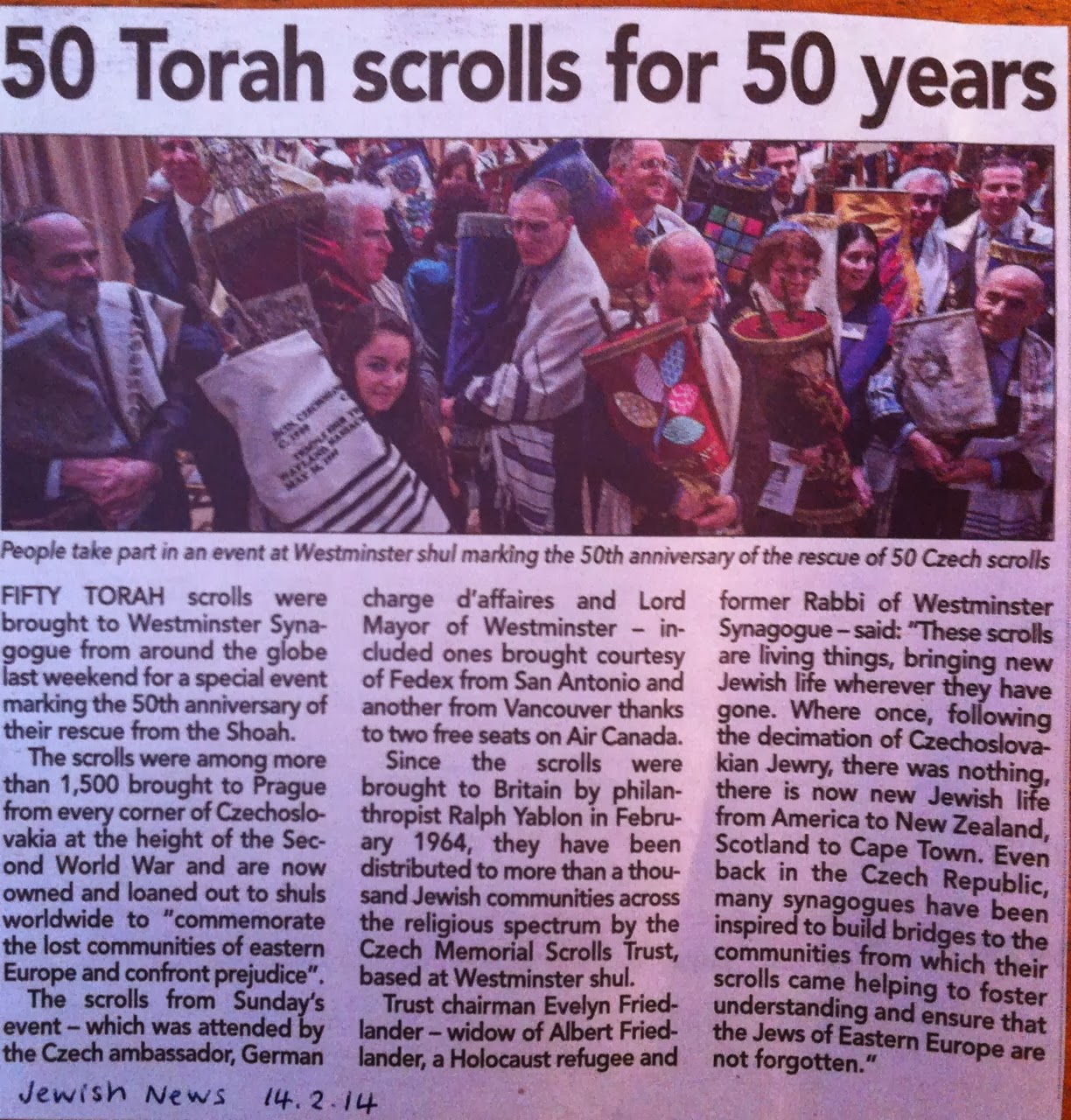 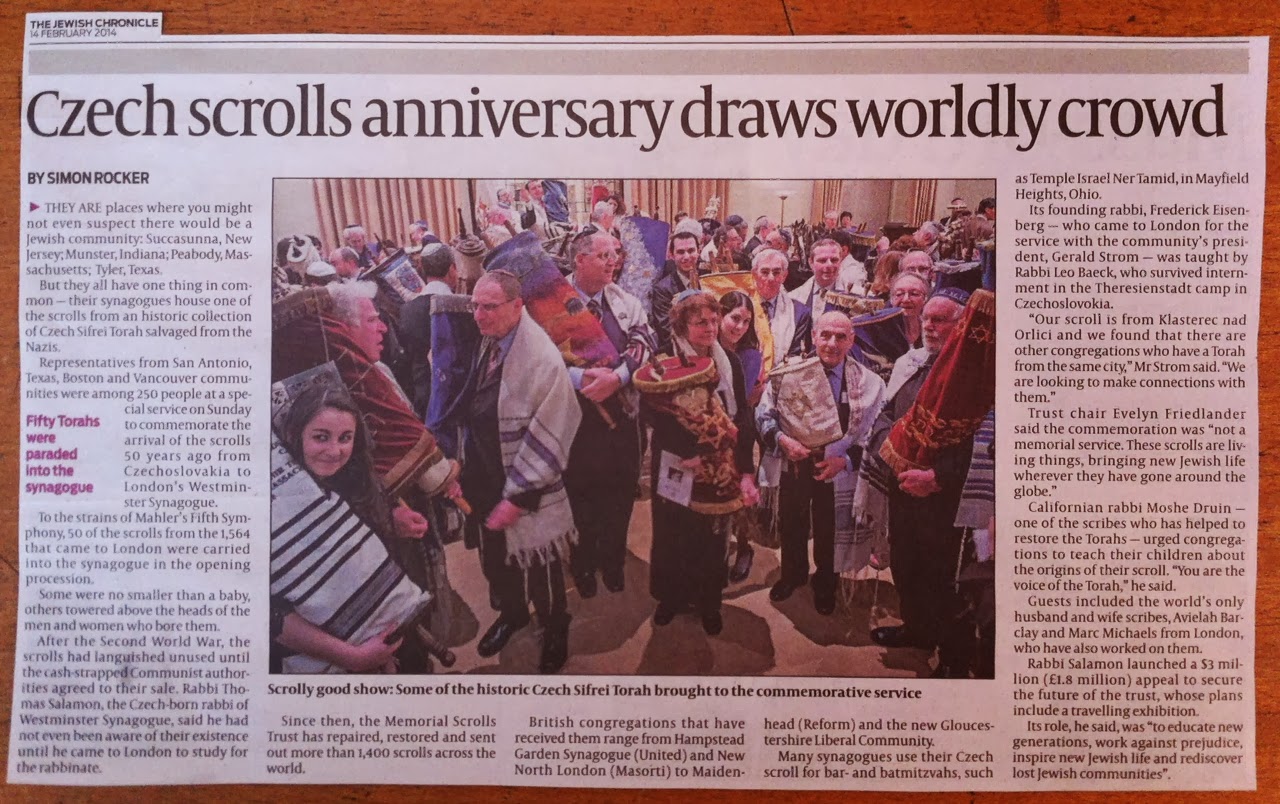 The papers did not mention it, but the photograph, and others soon to be available for viewing, were taken by our good friend Rabbi Frank Dabba Smith.

If your local paper has a report about our service, do please let us know and we shall feature it across our social media platforms. It was a great day, and we do want to build on the excitement and good will that it has generated. Thank you!
Posted by MST at 12:38:00 pm No comments:

Scroll-holding ongregations that were unable to join us yesterday for the Commemorative Service celebrating 50 years since the Czech Scrolls came to London were invited to make a poster and send it to us. These posters decorated Kent House during the festivities. Rabbi Moshe Druin collected the posters in Florida, brought them to the UK, and made this slide show for us (he also composed the soundtrack). We hope you enjoy it!
Posted by MST at 2:07:00 pm No comments:

What a Day it Was! 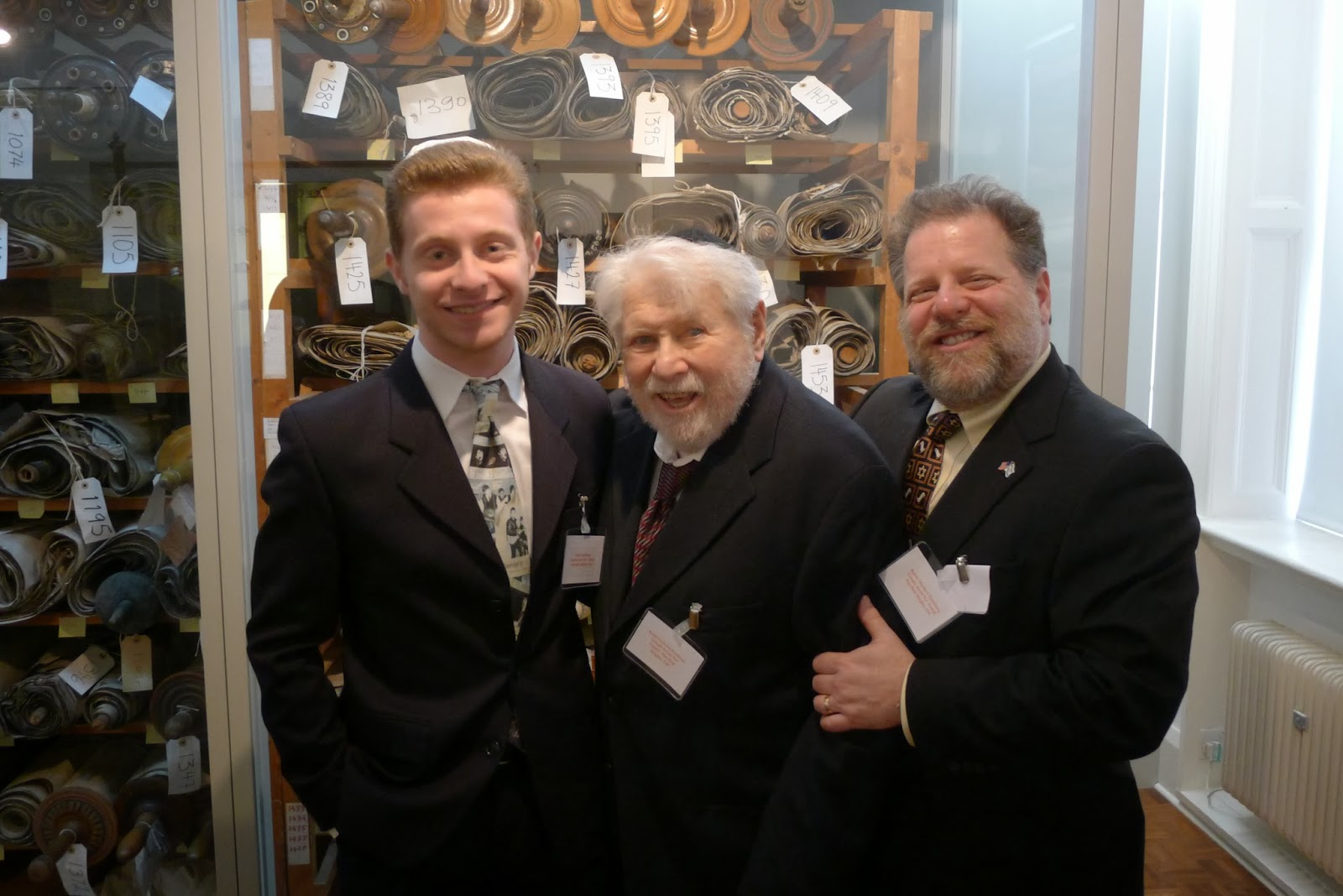 A first glimpse at a wonderful day at Kent House on 9th February. Nearly 60 Czech Scrolls were reunited at a service commemorating 50 years since the scrolls first arrived from Czechoslovakia.
In this photograph, three generations of the Eisenberg family: Rabbi Frederick, Rabbi Matthew and Teddy from Temple Israel Ner Tamid in Mayfield Heights Ohio, visit the Scrolls Museum before bringing MST #465 to the procession in the evening.
Keep an eye out for more reports and responses and … we hope to be able to share a video of the service via our YouTube channel very soon. So czech out TheMST1964 and see you there!
Posted by MST at 1:01:00 pm No comments:

If you will be carrying a scroll in the procession at our service this Sunday, please arrange to arrive at Westminster Synagogue at 5 pm.

We are expecting over 50 scrolls to be taking part in the service, and need to brief and organise our scroll carriers.

The MST office is not open on Fridays. We shall not be able to respond to your telephone messages or e-mails until next Tuesday.
If you need to contact us about the service on Sunday, please telephone Westminster Synagogue at 0207 584 3953.thank you, and have a wonderful Shabbat!
Posted by MST at 10:45:00 am No comments:

Czech Out the Newspapers!

In the run-up to the MST Service of Commemoration this Sunday 9th February, we are delighted to see that our scrolls are being featured in their synagogue bulletins and local newspapers. Here are a few examples:

MST #7 at Congregation B'nai Jeshurun in Pepper Pike, and MST #465 at Temple Ner Tamid in Mayfield Heights are featured in the Cleveland Jewish News.

MST #299 at Temple Beth Shalom in Needham, MA, blogged about their scroll being on its way to London

MST #401 at Congregation Kol Ami in West Hollywood, California celebrated our anniversary by passing the scroll from generation to generation.

MST #426 at Temple Beth Shalom in Santa Fe was featured in the Los Alamos Daily Post.

MST #974 at Temple Emanuel of the Pascack Valley NJ was featured in the New Jersey Jewish Standard.

And of course the Memorial Scrolls Trust was featured in the London Times at the end of January. You may read that article here.