It is incredible how an event may become distorted over the years as the story is told and retold, just like the children's game of Chinese Whispers. At the MST we must fight that constantly with regard to telling how the scrolls were saved. Here, for example, is a current web page that describes one of our scrolls previously from Kutna Hora:

"This scroll now in the Bristol and West Progressive synagogue has a remarkable provenance. A Jewish businessman travelling from England to Czechoslovakia just after the Second World War learned by chance that many Torah Scrolls were still in a cellar where they had been originally dumped during the Nazi occupation of that country. Many of the scrolls were defecated on or otherwise defaced. Some reportedly still had blood on them from the Jews who were killed when the Nazi ransacked and destroyed the synagogues. As there were virtually no Jews left in the country, a few English Jews arranged to bring a number of the less damaged scrolls to the Westminster synagogue in London in the 1950s. There they stayed until a travelling torah scribe called into the synagogue to see if any work was available. He ended up staying several years to repair the scrolls. One was donated to the Bristol congregation, some of whose original members were themselves Holocaust survivors."

The current link may be found here.

We have written to them, noting that the paragraph contains hardly any accurate information. The scrolls were in the Michle synagogue, not dumped in a cellar. There was neither excrement nor blood on them, and no defacement either. The scrolls were not ransacked by the Nazis, but sent by the Jews to the Prague Jewish Museum. Etc. It's a dreadfully emotive piece, and utterly false!

There is another factor that creates inaccuracies, i.e., when new information is discovered that negates the previous version of the story. The main example for the MST is the idea that the Nazis were planning a Museum to an Extinct Race and that is why they collected the scrolls. We are trying to erase that concept, since there is absolutely no evidence that such a plan ever existed. Rather it seems likely that the Jews in the Prague Museum organised the collection in order to save as much as they could in desperate times.

To find out more, have a look at our website. Meanwhile, do make sure that when you tell people about your Czech scroll, you share the most up-to-date version of the story! 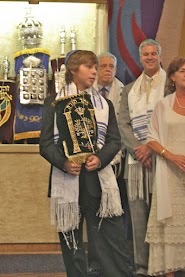 Our Czech Scrolls take part in the Jewish community in myriad ways. This is Samuel Zager, preparing for his recent Barmitzvah at Temple Beth Shalom in Sun City, Arizona. Sam is a Boy Scout, and this particular scroll was lent to the Grand Canyon Council of the Jewish Committee on Scouting. The scroll he is holding is MST #180 from Kolin.
Posted by MST at 3:35:00 pm No comments: