Have You Heard of Viktor Ullmann? 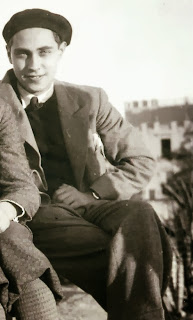 Aficionados of Czech Jewish music, and those of you who like to czech out new sounds, may I introduce you to the third in our series of composers - Viktor Ullmann. We hope to feature some of his music in the Memorial Scrolls Trust Service of Celebration on 9th February 2014 at 6:30 pm at Westminster Synagogue in Central London.

Ullmann's father was of Jewish heritage, but renounced his faith and officially converted to Catholicism, apparently to advance his career in the Austrian army.Victor was baptised as a Catholic and lived the majority of his life in the non-Jewish world. It was not until the Nazi antisemitic laws came into effect in Prague that he became identified officially as a Jew. Although he was able to send his two oldest children to England on a Kindertransport, he and his third wife, Elisabeth, were deported to Terezin in 1942. He died in Auschwitz in 1944.

"Educated in Vienna, Ullmann made important contributions to both Czech and German cultural life as a composer, conductor, pianist and music critic. Shaped by his engagement with Schoenberg's musical philosophy, German aesthetics, as well as the anthroposophy of Rudolf Steiner, Ullmann understood the role of art as central to human spiritual and ethical development ... Within the context of his own compositions, Ullmann used form as a powerful commentary on his own self-sconscious engagement with the traditions of Western art music as he engaged with them in the works of Schoenberg, Mahler and Berg."

You may read the rest of the essay here.