Have You Heard of Gideon Klein? 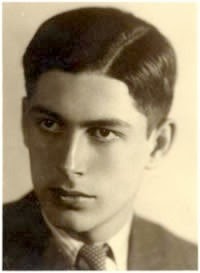 As we begin to prepare the liturgy and music for the Memorial Scrolls Trust Service of Celebration on 9th February 2014 at the Westminster Synagogue in London, we thought it might be interesting to introduce you to some of the Czech Jewish composers whose music we hope to feature on that day. Last week we highlighted the work of Pavel Haas. Today we'd like to present the life and works of Gideon Klein.

Born in Moravia, Klein studied composition at university, but when the Nazis closed all institutions of higher learning after occupying Czechoslovakia, he had to continue under the radar. Since Jews were banned from composing and performing, he worked under several aliases as a concert pianist. He was offered a scholarship by the Royal Academy of Music in London but anti-semitic legislation prevented his emigration and  by the end of 1941 he was deported to the concentration camp at Terezin. In fact, this terrible event gave him the opportunity for artistic expression and alongside Hass and Victor Ullmann he became a major composer from the camp. In 1944 he was sent to Auschwitz, and thence to Fuerstengruber, a coal mine c. 20 miles from the extermination camp. He died in January 1945, as the Fuerstengruber camp was being liquidated.

You may learn more about Gideon Klein and his work here.
A discography of his work may be found here.
Listen to some snippets of his music here.
Posted by MST at 3:21:00 pm