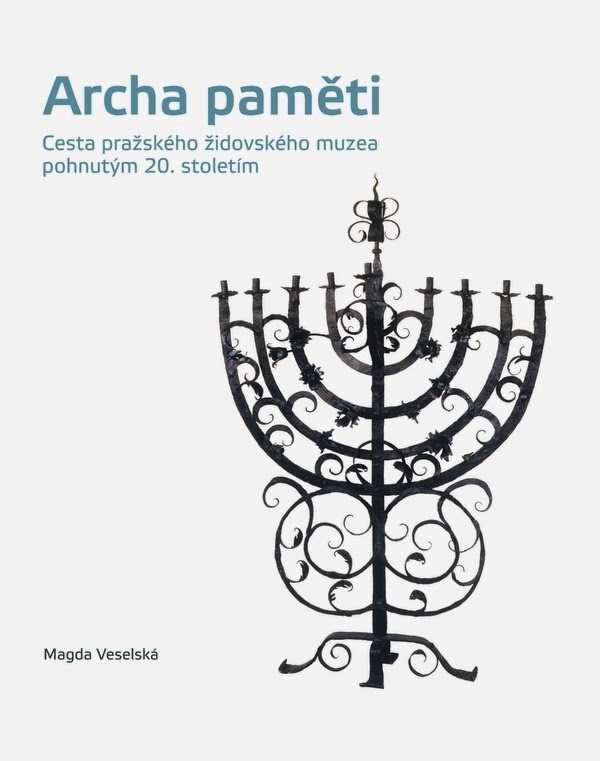 We've just received a printed copy of Benjamin Frommer's review in Judaica Bohemiae XLVIII-2 of Magda Veselska's book Archa pameti/Ark of Memory - The Jewish Museum in Prague's Journey through the Turbulent 20th Century, published in Prague in 2012. You may have have to subscribe to read it all online, or you could come into the MST office and read the version on our desk! The review is very positive, as it should be.

In order to support our ongoing project to share the current perspective on the myth of the 'Museum to the Extinct Jewish Race', here are some relevant quotes from Frommer's review:

"The amazing collection of Jewish religious and social artifacts (sic), unparalleled in the world thanks to their great extent and coherence, the guides explain, survived the war only thanks to the Nazis' perverted desire to create a 'Museum to the Extinct Jewish Race'. According to that story, the perpetrators of genocide allegedly sought to commemorate those whom they had erased from the earth. That illogical aim, to memorialize precisely what the Nazis sought to eliminate, illustrates the contradiction at the heart of this well known and, as Magda Veselska convincingly demonstrates, fundamentally untrue story ... Veselska demonstrates to the contrary that the Jewish Museum was and remains a remarkably successful project of the Jews of Prague themselves, who sought before, during and after the war to protect a legacy that was threatened with destruction."

"Veselska's deconstruction of the 'Extinct Race' myth begins with a thorough investigation of the Museum's origins. Ironically, the Czech Jews who first imagined and then founded the Museum, did actually seek to memorialize something on the verge of erasure:  the old Jewish quarter of Prague. The founders saw the so-called Asanace, the fin-de-siecle urban renewal of the Josefov quarter, which included the razing of three synagogues, as an opportunity to document a Jewish way of life that was quickly disappearing through assimilation."

"Contrary to popular belief, the author illustrates that the directors and employees of the Jewish Museum, and not the German occupiers, were the driving force behind the survival and astronomic expansion of the Museum's collection. True, German antisemitic policies of expropriation, forced emigration, and ultimately genocide provided the tragic opportunity. But it was the Museum staff itself that worked tirelessly to gather the materials left behind by Jews who departed first for abroad and later for concentration camps and ghettos. The staff, and not the leading Nazis in the so-called Central Office for Jewish Emigration (Zentralstelle), developed the concept behind wartime exhibits."

"The chiefs of the Zentralstelle, Hans Guenther and Karl Rahm, demonstrated the greatest interest in the Museum. Contrary to the theory of a Nazi-planned museum, however, the two men neither communicated their views on the Museum to their leaders back in Berlin, nor did they seek to micromanage the staff's activities. Guenther did call for an exhibit on "interesting things" from pre-emancipated Jewish life in the ghetto, but he left it to the employees to determine the content."

"Having undermined the myth of the 'Museum of the Extinct Race', Veselska then sets out to discover where this so widely spread falsehood originated. She shows that the concept was nowhere to be found in the writings of the few museum staff members who survived the war. Instead, H G Adler ... and ... Egon Erwin Kisch first expressed the idea that there was coherent German plan (sic). But Veselska concludes that Vilem Benda, Director of the Jewish Museum in the more open 1960s, may have been responsible for spread of the idea of a 'museum of a liquidated race' in an effort to draw international attention to its collections."