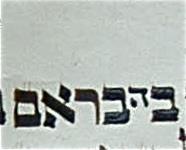 Soferet Avielah Barclay is working on our scroll MST #1177 at the moment, and posting photographs and information as she goes along. Here she comments on the tiny letter 'hay' within the word:

"The letter Hey is small in "be-hibaram" because the letter Hey is one of those which symbolizes G@D - an abbreviation of both the Four-letter Name "Y-H-V-H" and "HaShem". And according to midrash, before the creation G@D *was* ... that's it. All there was was G@D and G@D was all there was. So in order to make room for us, The Holy One had to contract. The word our tradition uses here is "tzimtzum" (צִמְצוּם) - "reduction" in modern Israeli Hebrew. Like a mother's body making room for a growing baby. So the Hey in the word meaning "they were created" (נִבְרָא) inspired this midrash which teaches us about G@D's process."


It is not traditional for a woman to work as a scribe. Learn a little more about this soferet here.
Posted by MST at 10:32:00 am